Alright, well since I’ve posted only serious nonsense recently, I thought the blog could use 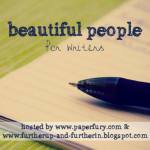 a little brevity. And by brevity, I mean doing the BEAUTIFUL PEOPLE meme hosted by
Paper Fury and Further Up and Further In. This month, the focus is couples.

So here’s 10 questions and answer on one of the couple (because yes, there’s more than one) in my first book, GUARDED:

No. 1 | How and why did they meet?
Kjersten and Jon meet during one of Kjersten’s shifts at Beans Hollow Café where she and her sister work. Jon was sent by the magical realm’s Council to document her progress with her abilities.

No. 2 | What were their first impressions of each other?
Kjersten’s first impression of Jon was just observing the similarities between them. It had been years since she’d run into a fellow martial artist, so the scars that come from splitting your brow open or breaking your nose stood out to her in a very specific way.

Jon’s first impression of Kjersten was a bit more conflicted. The information he’d been given on her painted her in a less than complementary light (the Council thought her abilities had killed her parents). So when he meets a girl who seems driven more by fear than guilt, it makes him question the validity of the Council’s report, which of course makes him more interested in getting to know the real her.

No. 3 | How would they prove their love for each other?
Their relationship is very much built of mutual respect and understanding. Neither of them needs ‘proof’ of the other’s affections. It’s more that neither of them quite know how to communicate the depth of their feelings.

No. 4 | What would be an ideal date?
Eek. Kjersten isn’t the romantic type, and Jonathan hasn’t entertained the idea of romance (also why they have a hard time communicating their affection for each other). The two of them just thoroughly enjoy each others’ company, whether it’s talking over Jon’s homemade kofta (a Middle Eastern dish where spiced ground lamb is wrapped in eggplant and baked in a delicious red sauce) or practicing new grappling techniques in a sparring match.

No. 5 | Is there something they emphatically disagree on?
Kjersten’s impulse to do things herself. It’s a constant source of contention in their relationship because Jon just wants to be there for her.

No. 6 | List 5 “food quirks” they know about each other. (Ex: how they take their coffee, if they’re allergic to something, etc….and feel free to mention other non-food quirks!)
Quirk 1: Jon loves Hazelnut Latte’s. It’s the only thing he orders at the café and when Kjersten needs to apologize, she usually brings along one to soften Jon up a bit.

Quirk 2: Kjersten is a bad cook. She can bake if she has a recipe because her mind is analytical that way, but her personality doesn’t lend itself toward artful expression.

Quirk 3: Cooking is a soft spot for Jon. It’s one of the few positive memories he has of his birth parents, so most of the things he cooks are recipes learned from his birth mom.

Quirk 4 (non-food): Kjersten is bad at regulating her temper. Really bad at it. Jon can usually see when one her blow-ups is coming down the hatch, but sometimes he doesn’t catch it quick enough.

Quirk 5 (non-food): Jon is a deceptively talented healer. His foster-dad was a village healer in the magical realm and taught Jon a lot of what he knew, despite Jon not being a healer’s apprentice. Basically, you want Jon on your side of a fight.

No. 7 | What’s one thing they know about each other that no one else does?
Kjersten is probably the only person Jon has allowed to know the depth of his heartache over being cast out by his birth family. Jon refuses to show that sensitive underbelly to the vast majority of people.

On the other side, Jon is the only person who Kjersten allows to see her vulnerability. She trusts him implicitly. So if she makes a mistake, he’s the first person she confides in about it.

No. 8 | What’s one thing that they keep a secret from each other?
The depth of their affection for the other. Most of their lives have been filled with losing people they care about, so both of them have a deep-rooted fear that if they were to reveal their feelings, they’d suddenly lose them.

No. 9 | How would their lives be different without each other?
Jon would continue through life, detached from those around him, ignorant to the real reason his family cast him out. Kjersten’s PTSD would continue to eat her alive without that tether to pull her back from the edge. (I think it’s important to note that Jon doesn’t ‘fix’ Kjersten’s PTSD. He is a source of non-judgmental support that acts as a type of mirror for her to process her emotions and fears so she can better manage her PTSD.)

No. 10 | Where do they each see this relationship going?
Unfortunately, Kjersten’s going to outlive Jon by a solid couple centuries. But right now, they’re just taking solace in the fact that they know they have each other’s backs, as well as their hearts.

This Q&A goes on for the rest of the month, so if you want to get to know some of the other couples in the series, let me know in the comments below and I’ll do a separate post for each. 🙂

If you want to learn more about Kjersten’s story, check out the pitch and first 500 words here.